On Wednesday, April 14, more than 100 local people, led by three Aboriginal Traditional Owners, held a peaceful demonstration in the contested logging area of Mumbulla mountain on the far south coast of New South Wales. Mumbulla Mountain is sacred to the Yuin people and stronghold of the last koalas in the region between Bermagui and Bega. Logging of Mumbulla Forest koala habitat near Bega started on 29th March 2010. The traditional owners present said "We, the traditional owners of Mumbulla Mountain, are distressed that woodchip logging is taking place on part of our sacred land. The land should be handed over to us to care for it, our sacred sites and the animals that live here. We need to preserve it for our culture and our future generations."

The protest was a united call by diverse community groups, residents and conservationists with the Aboriginal Traditional Owners for Premier Keneally to put a permanent stop to the destruction of this critical koala habitat.

"We were delighted that Aboriginal traditional owners joined us in this united community action today. The action has been taken by a large group of local people in the face of threats of arrest and automatic fines of $2000 per person just for entering the general area of the logging," said Harriet Swift of conservation group CHIPSTOP.

John Hibberd of the Conservation Council ACT region said "The views of the traditional owners of this country must be sought and respected through the permanent protection of the wider cultural landscape in which Mumbulla sits with its sister sacred Mountain, Gulaga,"

"The Premier simply cannot continue to ignore the environmental and cultural disaster taking place here," said Prue Acton of the South East Conservation Alliance and Noel Plumb of ChipBusters. "She also has a responsibility to the koalas and all the other animals and to future generations to preserve our wonderful forest heritage."

Opposition to the logging has been brewing for some time. At a meeting on March 7 over 400 people attended a meeting in Wyndham objecting to logging of nearby Yurammie State Forest. Ms Deb Harris, of the Yurangalo campaign told the meeting that Wyndham's water supply was at risk from the logging and that residents had lost all confidence in forestry management. The Wyndham meeting passed the following resolution:

"This meeting expresses its outrage about imminent logging of forests Bermagui, Murrah, Mumbulla, Tanja, Yurammie, Gulaga and Tantawangalo, which are known to be koala habitat now or have been in recent years and should be available to koalas into the future. We note that the proposed logging poses a threat of regional extinction to the far south coast koalas and the trees to be removed will overwhelmingly be used for woodchips. We call upon the NSW Government to urgently abandon plans to log these forests."

A meeting in Tathra on March 8 attracted about 120 people. Ms Deborah Tabart of the Australian Koala Foundation addressed the meeting, stressing the importance of gaining national threatened species listing for the koala.

A blockade of both entrances to Mumbulla Forest on April 9 attracted about 90 people and successfully disrupted logging operations. Greens MP and South East NSW spokesperson Lee Rhiannon who attended the Mumbulla Forest blockade, said "These native forests must be protected and that means logging in these South East NSW forests should end," Ms Rhiannon said. "This is an issue that Premier Kristina Keneally cannot ignore. The koala is an Australian icon and the public know we need to protect its habitat."

"Surely Ms Keneally does not want to be remembered as the NSW premier who stood by while this koala habitat was trashed. "If she allows this logging to proceed 95 percent of the timber will go to the export woodchip market." Ms Rhiannon said.

People at the blockade expressed anger at Primary Industries Minister Ian Macdonald at the failure of the Forests Service to abide by the regulations they are suppose to operate under. Protestors also said that NSW Environment Minister Frank Sartor and Premier Keneally would be targeted for their inaction in saving native forests and koala habitat. "Mr Sartor's job is to stand up for the environment and ending native forest woodchipping should be at top of his to do list." said Lee Rhiannon "If the NSW Environment Minister cannot stand up for the koala it will be clear he is nothing more than Mr Macdonald's junior with no clout." 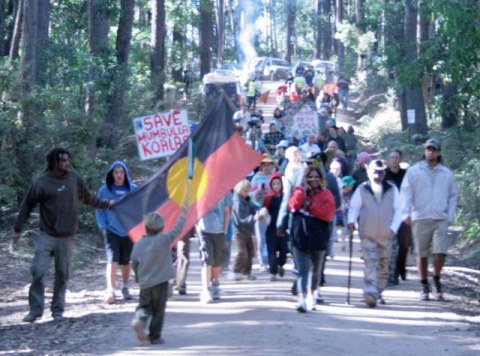 Australia the land of extinctions

The greed of the loggers, supported by the NSW state government, will mean that majestic Australian Spotted Gums are cut down and trucked to the Japanese mill at Twofold Bay at Eden for woodchips again to export to Japan so they can profit from paper. This decision is based on pure greed and vandalism - all for the "economic benefits"! Koalas are becoming threatened to extinction in NSW and Queensland due to land clearing, developments and logging. The biggest threat to koalas is lack of food! It is time traditional owners had more say in the management of our environment. They managed to live sustainably for thousands of years. 220 years since European settlement has been a history of devastation and has made Australia the land of extinctions, despite this being the UN Year of Biodiversity. Shame on the NSW government!

Ignorance only reinforces our chance to gain control of the land

The saddest thing was the disrespect towards the oral known history of the area, Aboriginal people are constantly ignored to the point we as traditional owners will abandon any efforts to co-exist, we dont accept your selective hearing and strait out ignorance, why even listem=n to your points of view if you can ignore direct oral historys about the cultural significance, why show any respect to a people that can disregard our knowledge in the pursuit of material wealth, White australia have been USING the lack of historic records to discredit Aboriginal people since invasion, and its still happening, WE DONT TRUST YOU. actions speak louder then words. if their wasnt historical records to support our knowledge the mountain would have been lost. you know Aussies havnt come far at all when they still USE historical records to ignore the truth, The lies must stop and white Australia must do their bit for the country, stop being racist morons who lie about Australias history, the rape and murder and the leagacy Aussie cant seem to shake, this denilism is whats destroying this great land, we have been peaceful, tried to live WITH you, now its your turn to do the right things before we stop entertaining you bunch of immoral parasites leaching all you can for nothing, show me the historical records you love so much, that show Aboriginal people giving their land away, they dont exist and neither does a legit claim to this country, dont you understand it only english law, not international standards so its in Aussie intrests to do your part before we stop playing your games and attempt to gain our land back. Ignorance only reinforces our chance to gain control of the land, then you will lose big time