In April Conservation groups on the South Coast of New South Wales called on the Keneally Government to immediately reject a proposal for a Wood Fired biomass Power Station, nick named by them as 'Dead Koala Power', at the infamous Eden Woodchip Mill. South East Fibre Exports, a Japanese owned company, plans to use chipmill timber waste to generate electricity in a 5.5 megawatt $20million plant. The power station would be an environmental disaster for native forests and a climate disaster with greater CO2 pollution than coal fired power. Public submissions online on the assessment for the biomass power station can be made until April 22.

The Eden woodchip mill announced plans to build a new power station fuelled by wood from native forests in November 2008. The mill's owner proposed to market the power station as both renewable and low carbon, even though over 70 per cent of the biomass would be from native forests. NSW Greens MP John Kaye pointed out in December 2008 that "Forestry biomass is at least four times worse than burning coal. Forestry biomass will not be economic, sustainable or low carbon."

"Consideration of this proposal by the ALP Government breaks its promise given under Bob Carr that native forests would never be used for power generation", claimed Noel Plumb of anti woodchip group ChipBusters. " A promise given after public outrage at such proposals."

"The woodchip industry is seeking to create a massive new market for woodchips through burning the forests for electricity production, on top of export woodchips for paper production. It is known to the electricity industry as 'dead koala power' and leading industry players are shy of it, the public won't buy it." said Noel Plumb, "It is a disgraceful proposal that will ensure not only the extinction of the last koala colony in the South East Forests, in Mumbulla SF, but also lead to the extinction of other endangered wildlife in the forests, including owls, bats, parrots, gliders and potaroos."

The proposal has been criticised by Victorian climate and hydrology researcher and consultant, Aron Gingis, who said that the plant will have an adverse affect on air quality which will cause a decline in rainfall, affecting river flows and leading to an increased bushfire risk due to dry conditions. He told the ABC that the project will have devastating consequences for the Snowy River. "The area of the catchment of the Snowy River will get basically nil rainfall and snowfall," he said. "In last September you had a bit of snow in the area, about 30 or 40cm in some areas. If they had that biomass power plant operational, clouds would simply not precipitate in South East slopes at all." he said.

Harriet Swift of local forest conservation group CHIPSTOP said "The industry describes woodchips as waste wood from logging operations but it's a sham. An average of 90% of all trees felled in South East NSW and East Gippsland VIC forests go straight to the chipmill. We are facing approval by the Government to this monstrous proposal in less than 3 weeks. The Planning Minister has called it a state significant infrastructure development and is set to approve it under the infamous Part 3A powers that effectively override the Environment Planning and Assessment Act."

A similar proposal under Bob Carr as Premier to burn forests as charcoal for silicon production was defeated.

"Australians have the common sense to know that this is a dirty deal - 'dead koala power'," said Prue Acton OBE of the South East Regional Conservation Alliance. "The proposed power station is not clean, it is not green and it is not going to happen. Conservationists have been battling to save the last koala colony in the South East Forests from woodchipping for paper pulp. The Eden Chipmill Power Station must not be allowed to kill off the koalas or any other forest animals. Its time to call a halt to all woodchipping of our forests."

"The NSW Government seems actually to want another running brawl on such a losing issue, all the way to the next election. It will certainly get a brawl if Premier Keneally does not step in to put a quick stop to this menace and, in so doing, restore some confidence in its environmental promises." said Ms Acton.

The native forests in South East Australia have been shown by scientific research to be the world's most carbon dense forests.The Victorian and New South Wales Governments continue to allow logging of old growth native forests, destroying this valuable carbon store.

Public submissions on the assessment for the biomass power station can be made until April 22 at the NSW Government Planning Major Assessments. Submissions can be made online. 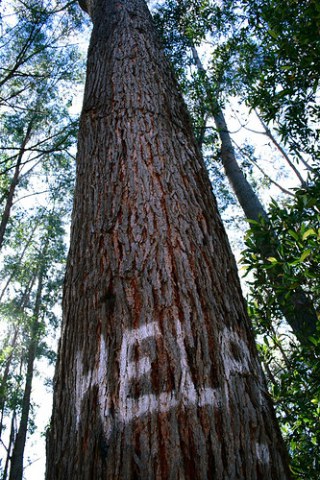