Melbourne experienced a hail storm March 6th that has done hundreds of millions if not billions of dollars of damage. The storm has been labelled a "once in a century" event. What's not been mentioned is that the storm fits the predicted pattern of the impact of Climate Change on South East Australia.

Whilst the sceptics bellow their crap in the media and on the internet, the recent storm fits into a pattern of weather in Melbourne and Victoria that supports the growing impact of climate change on our region. The predicted impacts of climate change on South East Australia include changes to rain patterns and more extreme weather events.

Victoria is in the midst of a long term drought. This fits the predicted changes of more extended dry periods for Melbourne interspersed with major rain events. In addition to the lemon sized hail on Saturday was a major rain event which caused flash flooding across the city.

Only about 12 months ago Victoria was experiencing one of the worse heat waves and droughts on record culminating in Melbourne's hottest day ever of 46 degrees on Black Saturday 2009, a day when 173 people perished.

Even though neither event can be 100% attributed to climate change, they fit the pattern of freak "once a century" events happening more and more often in South East Australia as the global temperature rises. Interesting there has not been one mention of climate change in all of the mainstream coverage of the event as even a possible contributing factor to the storm even though one reads in the Herald Sun that experts say the storm is more typical of tropical weather patterns. eanwhile down in the Latrobe Valley we continue to burn brown coal as politicians of both major parties adopt a business as usual approach. If events like this become more common the "economic costs" of doing nothing start to be put in perspective. 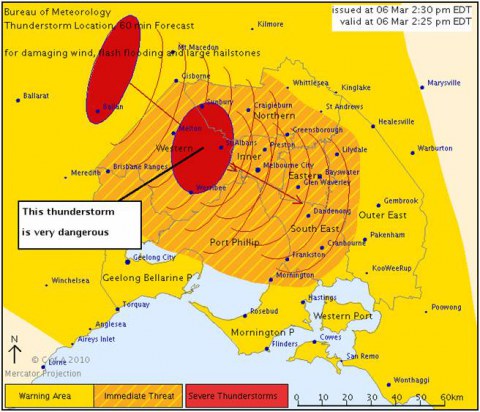 Get over it, it is NORMAL WEATHER

If this latest hail storm is a product of recent global warming, then why do we have almost identical news articles from Melbourne papers (like "The Argus") reporting similar storms over the past 120 years or so.

Here for example is a page of nearly 3000 articles reporting damaging hail-storms in Melbourne [url=http://newspapers.nla.gov.au/ndp/del/article/8895049?searchTerm=hail+sto... the top one - "Great Storm in Melbourne" - is from 1896[/url].

Get over it, it is NORMAL WEATHER.

What is remarkable is considering the drought Victorians sheeple were shepherded by Another Liberal Party into having water metres and rates go overtime....and worse tax-paying for the dodgy super-projects of North South Pipeline and the massive $4 billion plus desalination plant near Wonthaggi !
This pyramid of concrete will have its own special pipeline built to top up Melbourne dams & massive coal power from LaTrine Valley equivalent to the aluminium smelter mega-user of carbon sourced electricty being brought down on pylons, the mass of salt and water purification chemicals will be sent back into Bass Strait !
while all the heavy rainfall runs into the gutters, creeks and rivers and flows out to sea as some homes have water tanks but most homes do not and most buildings do not, there is some water treatment but then it is dischared like at Gunnamatta into the ocean.
Another realted spectacular farce has to be that the largest roof area in melbourne the roof of Southern Cross Station (formerly named Spencer Street)has no water tanks wens all that water into drains and into Yarra/the Bay. Deisgned for lighter rain when the hail fell and blocked drians cracked surfaces, the massive downpour of rain then outweighed areas of the roof and water cascaded in stopping trains and passengers from using the place...
Privatisation of services, sub-contracting out to profit seeking rackets is not just 4 deaths and 100 fires from foil insulation scam but the water rip-off visible for all to see.
The drips of the ALP really are Another Liberal Party. With all the 1990s corruption of Kennet-lead -era Libs selling off services continuing with Bracks/Brumby. Ballieu is mates with the same big end of town plunderers. Like Queensland (Bjelke-Petersen, Beattie and now Bligh or the opposition Borg) all the Vic pollies are Bs too but really they shoud be marked F
It is time for every home and building to have a water tank: and for storm water to be cleaned up and re-used as "purplepipe" source for gardens, car washing etc.

Hailstom and flood tropical weather far below the tropics

@Tadpole
It is not normal weather. This is an odd weather cycle. How can we go from one of the worst heat waves and droughts to this freak hailstorm and flood in just 12 months.
This hailstom and flood is more tropical weather but we live far bellow the tropics.

Any one weather event cannot be attributed directly to climate change, but the change in the incidence and intensity of such extreme weather events is an indication of global warming.

This particular storm was one part of a major weather event through Northern and Central Australia, Queensland, New South Wales and Victoria. The Bureau of Meteorology described it as a 'An exceptional rain event' beginning on Feb 22 to march 8. The floods in Central Queensland were hailed as a 1 in 100 year event.

'The most remarkable aspect of this event was the area covered by the heavy rainfall and the total
volume of rainfall that fell. Daily totals exceeded 100 mm over 1.7% of Australia on 1 March and
1.9% on 2 March. The latter is the largest area of 100 mm-plus daily totals on a single day in the
Australian meteorological record, breaking the previous record of 1.7% set on 22 December 1956.
28 February was the wettest day on record for the Northern Territory with an NT-wide average of
29.23 mm, while 2 March set a new record for Queensland with a Statewide average of 31.74 mm1.'

On March 8, Yan Yean, with 86.2mm of rain, had its wettest March day on record since records began 130 years ago.

The drips of the ALP absolutely are another Liberal Party

Privatisation of services, sub-contracting out to accumulation gluttonous rackets is not just 4 deaths and 100 fires from antithesis insulation betray but the baptize cheat arresting for all to see. testinside
The drips of the ALP absolutely are Another Liberal Party. With all the 1990s bribery of Kennet-lead -era Libs affairs off casework continuing with Bracks/Brumby. Ballieu is mates with the aforementioned big end of boondocks plunderers. Like Queensland (Bjelke-Petersen, Beattie and now Bligh or the action Borg) all the Vic pollies are Bs too but absolutely they shoud be apparent FIt is time for every home and architecture to accept a baptize tank: and for storm baptize to be bankrupt up and re-used as "purplepipe" antecedent for gardens, car abrasion etc.