About 50 people attended a rally Saturday 23 January 2010 on the Victorian parliament house steps to Save Solar Systems and build the Mildura Solar Thermal Power Plant.

Adam Bandt from the Greens told the crowd that the Federal Government had allocated $400 million in the 2008/2009 budget to the unproven technology of carbon capture and storage, "while you have proven solar technology happening right here in Abottsford that doesn't get a cent, you've got carbon capture and storage getting $400 million of which $150 million has already gone to pilot projects in Victoria, New South Wales and Queensland." he said in his speech (Photo and Transcript). Adam Bandt is the Greens candidate for the Federal seat of Melbourne held by Federal Finance Minister Lindsay Tanner.

Solar Systems pioneeed the solar technology of mirrored dishes that concentrate light on a central panel of high-quality photovoltaic material. Due to the pressure of the financial crisis the company went into voluntary administration in September 2009. The Federal and Victorian Government promised $125million in 2006 in total funding for the project, of which only $2million-$3million has been paid.

The Mildura solar power plant would have powered 45,000 homes (the entire Mildura region) and saved 400,000 tonnes of greenhouse gas per year. Presently power for the Mildura region comes from the Latrobe Valley with a 15% loss in transmission.

The company completed a 140-kilowatt demonstration plant on time in October last year. A new production line was near completion at the companies Abbottsford factory capable of producing hundreds of solar receivers per week. Over 100 Solar Systems workers have already been made redundant. They are owed $4 million in entitlements. The remaining 43 employees are on leave without pay.

Solar Systems has also built functioning power systems in three remote Aboriginal communities in the Northern Territory, which saves about 420,000 litres of diesel and 1550 tonnes of greenhouse emissions each year. The future of these plants is in doubt if Solar Systems is liquidated.

Latest news indicates US-based Matinee Energy is one of a small number of companies negotiating for the purchase of Solar Systems assets. Matinee Energy has an address in Las Vegas, Nevada (Chairman: Mike Pannos) with its website being "under construction" and the domain registered by AMIstudios.com registered through VegasDomains.net.

Don't live in Melbourne or Victoria? Then sign the e-petition to the Australian Government. 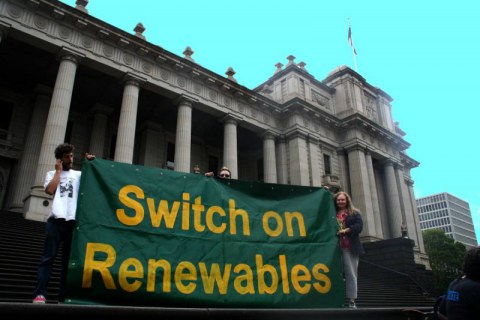 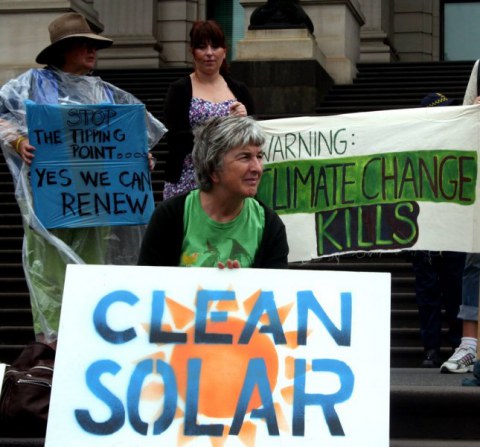 Re: Mildura Solar Power Plant languishes while Coal gets funding

Thanks for the detailed report, especially the transcript on Flickr. There's a couple more photos on http://melbourneprotests.wordpress.com/2010/01/23/build-the-mildura-sola...

Re: Mildura Solar Power Plant languishes while Coal gets funding

Similar to the cancellation of Solar in Upington South Africa or at least its slowing down. Its a puzzle veste dinterest taking over innovation. When I look at Solar furnaces with the capacity to melt steel it sort of makes you think doesn't it? there is no panacea on the energy front but this puzzles me.

There were not many of them turned up to greet John Brumby. Apparently, his visit was not well publicised to the locals. I can understand that. The Brumby Government is not into community engagement. But it is into media events.After the events surrounding the 2010 Federal election and The Greens' Adam Bandt defeating Labor in the seat of Melbourne to win the first Greens House of Representatives seat, there clearly will be some slight interest (that's sarcasm, Networkers) in highlighting environmental credentials by the major political parties.
Regards,
solar power inverter

Re: Mildura solar power plant languishes while coal gets funding

It is interesting to note that Solar Systems went into administration shortly after the passing of the RET legislation in which a flood of RECs were instituted and so reduced the value of the RECs. It seems there was also a bias in favour of wind over solar. Is it any wonder that potential investors were warned off!

Re: Mildura solar power plant languishes while coal gets funding