The concentration of methane in the atmosphere is rising, according to measurements made by the New Zealand National Institute of Water and Atmospheric Research (Niwa) at its Baring Head Station near Wellington.

Methane (CH4) is a greenhouse gas whose affect on climate is 21 times stronger than Carbon Dioxide (CO2) and is the second most important contributor to global warming behind carbon dioxide. It is produced naturally mainly by biological breakdown of organic substances in oxygen-deficient conditions, such as the digestive system of ruminant animals and the decay of plant material in swamps or landfills. It is also prevalent in fossil fuels such as coal, oil, and natural gas (which is mainly methane).

Measurements released in December 2009 from its globally significant Baring Head station showed that southern hemisphere atmospheric methane increased by 0.7% over the two-year period 2007-08. The increase amounted to about 35 times more than all the methane produced by New Zealand livestock each year.

"The evidence we have shows that methane in the atmosphere is now more than double what it ever was during the 800,000 years before 1700AD" said NIWA Principal Scientist, Dr Keith Lassey. This analysis is based on examination of ancient air trapped in polar ice that has been extracted and dated.

The rise in methane follows a three-year period of no growth, and accounts for more than half of the growth observed over the ten years 1999-2008 (1.2%). The data is consistent with global trends with the US National Oceanic and Atmospheric Administration (NOAA) reporting that global methane concentrations rose in both 2007 and 2008 after a ten-year lull.

The increase has been attributed to unusually high temperatures in the Arctic and heavy rains in the tropical forests especially in the Amazon and Indonesia, after a decade of near-zero growth. Burning of forests contributed about 20 percent of the total methane released into the atmosphere in 2007.

The increased tropical rainfall was at least partly a result of a La Nina weather pattern of 2007 and 2008. Other factors are at work include global growth in commercial livestock farming, mining of fossil fuels, leaks from urban gas networks, and continued burn-offs of tropical rainforest.

As yet global warming has not triggered release of massive trapped carbon in permafrost or methane hydrates on the seafloor to methane according to the NOAA study that said their observations "are not consistent with sustained changes there yet."

"The most likely drivers of the CH4 anomalies observed during 2007 and 2008 are anomalously high temperatures in the Arctic and greater than average precipitation in the tropics. Near-zero CH4 growth in the Arctic during 2008 suggests we have not yet activated strong climate feedbacks from permafrost and CH4 hydrates." says the study published in the Geophysical Research Letters.

But research continuing in the north of Russia led by Professor Igor Semiletov from the University of Alaska at Fairbanks indicates methane seepage is increasing "Methane release from the East Siberian Shelf is underway and it looks stronger than it was supposed [to be]," said Igor Semiletov in a BBC news report "It is important now to understand how fast it is being released and how much is being released," he said.

Release of these methane reserves is a major climate tipping point, that could have a runaway affect on global temperatures and climate. Global warming may cause Siberia's subsea permafrost to thaw. Estimates of carbon trapped in shelf permafrost range up to 1,600 billion tonnes which is roughly twice as much carbon as in the atmosphere now.

Image Caption: "The atmospheric methane measured at Baring Head near Wellington since August 1989. The graph shows the methane mixing ratio in parts per billion (molecules of methane for every billion molecules of dried air). Methane concentrations grew strongly in the 1990s then tailed off. There was even a hint of declining concentrations (negative growth) for 2003-06. Growth resumed in 2007 and appears to be persisting." (Image from NIWA media release) 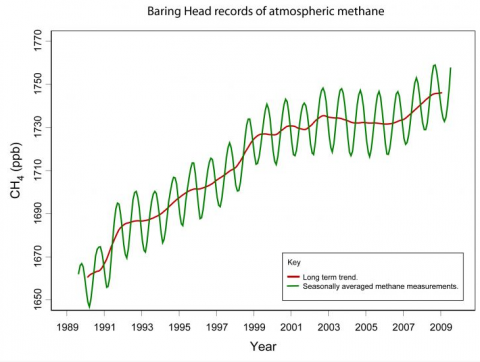