The Sea Shepherd high speed powerboat, Ady Gil, has now sunk according to Paul Watson interviewed on ABC morning radio. The stationary ship was purposefully rammed by a Japanese whaling security vessel endangering the 6 Sea Shepherd volunteers on board.

The Bob Barker attempted to tow the stricken vessel to the French Antarctic research station Dumont Durville, but the Ady Gil continued taking on water into its main hull. The Sea Shepherd Conservation Society vessel Bob Barker reported the last known position of the Ady Gil to the Australian Rescue Coordination Center (ARCC). This report was made because the Ady Gil — which was originally going to be towed to a nearby base — is now sinking and could pose a navigation hazard for the next two to three hours.

According to a statement from Sea Shepherd "The Bob Barker’s call to the ARCC fulfilled Sea Shepherd’s legal reporting requirements for this incident, but not its obligation to protect whales from the illegal Japanese fleet that is killing whales illegally in the Southern Ocean Whale Sanctuary."

The crews of the Ady Gil and Bob Barker worked round the clock to remove possible environmental hazards. All diesel and oil, and much of the electronics was salvaged to avoid polluting the Antarctic pristine environment. No help was offered by the two Japanese vessels in the area. The Bob Barker is still within sight of two harpoon vessels, likely left to keep track of them.

The Ady Gil suffered catastrophic damage when it was rammed by the Japanese whaling vessel Shonan Maru 2. The 6 crew werea all rescued by the second Sea Shepherd vessel in the area, the Bob Baker. Crewman Simeon Houtman, of Auckland, received broken ribs in the ramming.

Peter Bethune, New Zealand skipper of the Ady Gil said yesterday "They basically drove straight over the top of us and there was nothing we could do. We were all on top of the vessel except for one of the crew members who was inside. When they were about 50 metres away they suddenly veered to starboard and cut off the front three or four metres of my boat and sheared it in half. If anyone was in the forward sleeping quarters they would be dead."

According to Paul Watson "The Ady Gil was stationary at the time, they were waiting for the Shonan Maru to pass. And the Shonan Maru turned and rammed into them." Sea Shepherd is intent on pursuing the whaling fleet and disrupting whaling to stop their illegal activities through nonviolent action, according to Paul Watson. No whaling yesterday, and none will happen today.

"We will be using nonviolent tactics to do everything we can to harass, interfere and shutdown their illegal operations. This is our 6th year down here. And in those six years we have not broken any laws, we have not been charged with any violations, we've not been sued, and we've not injured anybody. But we have been effective. We have cut their quotas in half for the last 4 years and we intend to make that happen again." Paul Watson told the ABC.

Paul Watson said that the Ady Gil can't be insured for an act of war. The Ady Gil was "targeted and destroyed by a hostile vessel."

Investigations into the ramming have been launched by New Zealand, Australia and Japan. Ady Gil was a registered New Zealand vessel where the primary investigation will take place by Maritime New Zealand investigaters. High level talks took place between the New Zealand Government and Japan's New Zealand Embassy. An ABC news report alledges that at the Wellington meeting, Japan said it regarded the incident as "regrettable" but a "low-key event".

As the collision occured inside Australia's nominal search and rescue zone, the Acting Australian Prime Minister Julia Guillard has ordered the Australian Maritime Safety Authority (AMSA) to conduct an investigation and has committed to making the results public. Both Whalers and conservationists have requested Australia to send a vessel to the area, but Julia Guillard ruled out sending a boat to monitor the situation in Antarctic waters at this stage.

Guillard watched videos of the ramming and said "It is clear emotions are running high and lives are at risk," she said. "Having watched the video it deeply concerns me. It seems miraculous that lives were not lost." 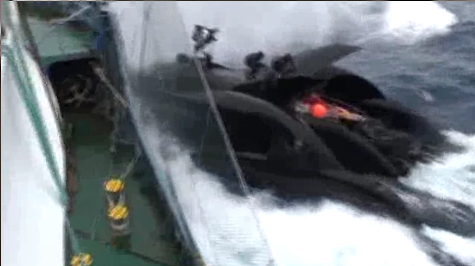 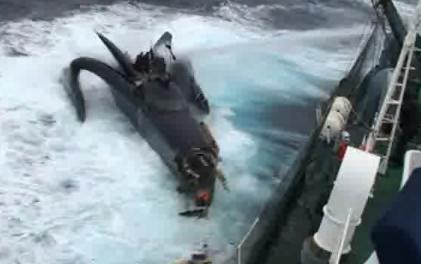 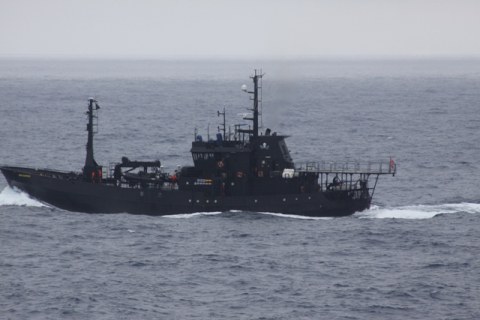