Pressure is clearly building on poor countries to back down from strong climate targets here in Copenhagen. At a powerful press conference this morning, the Prime Minister of Tuvalu accused Australia of setting up a private meeting with a number of small island states and trying to bribe them into accepting the 2 degrees C target that would mean extinction for their islands.

Related Videos : A Plea from Melbourne (5:58), Tuvalu at Copenhagen: 'The Fate Of My Country Rests In Your Hands' | Tuvalu Islands might disappear by 2050 | Clemmie James on Tuvalu and climate change awareness

At a press conference that is just wrapping up at the UN climate talks, the Prime Minister of Tuvalu had a clear message for the world: ”Survival is not-negotiable.” After showing a powerful video of devastating flooding in Tuvalu, the President made a strong appeal for a real deal that meets the latest science: ”Our future rests on global action to address climate change and we must have a set of safe guards based on sound science. We must ensure that global temperatures peak at well below 1.5 degrees Celsius. It means that global greenhouse gases must stabilize at 350 ppm. These safeguards are non-negotiable.”

Prime Minister Ielemia also highlighted the immense amount of pressure that small island states are coming under to accept a weak deal: ”Under the last few days we have seen considerable pressure to accept a deal based around 2 degrees limit. We have not yielded to this pressure because our future is not negotiable.” He highlighted pressure from Australia in particular:

“There are some countries like Australia who have been trying to arrange a meeting with us to probably water down our position on 1.5 degrees celsius. We did not attend that meeting, but I heard from other small islands that Australia was trying to tell them if they agree to the 2 degrees limit, money would be on the table for adaptation process. That’s there choice to accept the money and back down. But Tuvalu will not. As I said in my speech, 1.5 degrees celsius is our bottom line…

I as a human being I feel that the leaders that are pushing their countries to adopt this 2 degrees they should know from science that that will be killing a lot of people around the world, that should change their position. I will not sign anything less than 1.5.” Those are brave words. Australia and other rich countries will continue to increase the pressure on developing countries to back down. Get ready for the media to get involved as well: articles blaming poor countries for the failure of the talks are already beginning to circulate. But Tuvalu and many others know that no amount of money can protect their homes or their future: they need action, not bribery. When asked about what he would do if an agreement could not be reached and climate change not stopped, the Prime Minister closed his speech with a touching appeal,

We just have to prepare ourselves for the worst. We have no where to run to. We must prepare ourselves individually, family wise, so that we no what to do when a cyclone comes or the hurricane blows. There is no mountain we can climb up, no inland we can run to. We just have the face it. And that’s why we’re making noises around the world … We don’t want to dissappear from this Earth.

We want to exist as a nation. Because we have a fundamental right to exist alongside yourselves.

Australia needs to hear he message loud and clear that they can’t bully smaller countries into backing down from what science says is necessary. Tuvalu and other island nations are fighting on all of our behalf. As President Nasheed of the Maldives has said, “If we can’t save the Maldives today, we won’t be able to save Mumbai or New York City tomorrow.”

Please pass this post along and spread put the spotlight on Australia’s dirty tricks. Island’s need funding for adaptation, but they also need real emissions cuts and a strong, legally binding treaty.

Tuvalu isn’t backing down and neither should we.

Originally posted in the It’s Getting Hot In Here Blog - Dispatches from the Youth Climate Movement, December 17th, 2009 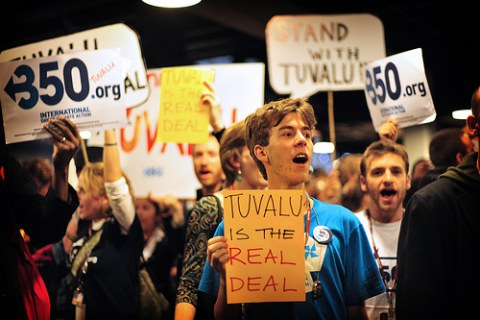