Greenpeace today unveiled a message for Prime Minister Kevin Rudd: a banner on the iconic Sydney Opera House saying: "Stop the Politics - Climate Treaty Now". Five Greenpeace activists scaled one of the sails of the Opera House to do the banner drop.

The banner drop ocurred at 9.20am with police quickly sealing off the area to tourists and the banner was taken down by 10am. The activists have each been charged with trespass.

After peace activists Will Saunders and David Burgess painted 'NO WAR' on the Opera House in March 2003, security for the iconic Sydney Opera House was reviewed and upgraded. But evidently not enough to foil Greenpeace activists today.

Greenpeace chief executive officer Linda Selvey told the ABC World Today program "With only four days to go with Copenhagen, it is a critical time to get across the message that Australians want strong action on climate change... the most important thing that is happening in the world's history is happening at the moment at Copenhagen and with only a few days to go, we need to do what we can to get a message across to world leaders that we need strong action on climate change." she said.

In a Sydney Morning Herald report Linda Selvey said "Basically, (Prime Minister) Kevin Rudd and other world leaders seem to be focusing more on politics than they are on getting the outcome which is what we need for the planet.

"The fossil fuel industry is very cashed up and has been spending a lot of money to get the ear of politicians. We feel it's very important to use whatever tactics we can to get our message across on behalf of Australians." she said.

Greenpeace is running a campaign for Australia to put stronger commitments on the table at the climate negotiations in Copenhagen. Their demands include:

For more information on the Greenpeace Rapid Response Campaign:

In March 2003 on the eve of the invasion of Iraq two peace activists, Will Saunders and David Burgess, painted 'NO WAR' on the Opera House. They were sentenced to nine months' periodic detention for malicious damage, and ordered to pay $151,000 in clean-up costs. Many fundraisers were held to help the two meet this cost. 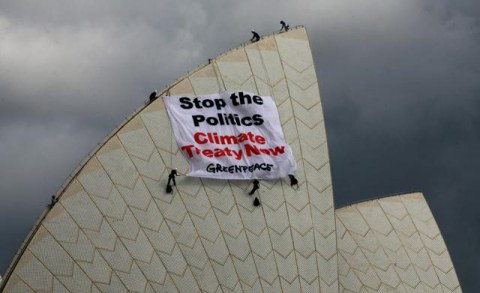