Alex Whisson from Perth Indymedia, currently in Copenhagen making a documentary on the protests and COP15 summit was detained on Sunday as hundreds of people marched towards the harbor in Copenhagen, chanting and carrying banners reading "Our planet not your business". Several journalists and photographers were targeted by the police and detained.

Riot police flanked the rally and less than an hour later the police kettled the demonstration. The police first targeted the music van, ripping people from the van. The demonstrators were separated into three groups, had their hands tied behind their backs and sat in rows on the ground.

At about 14:45 coaches arrived to take people away to the holding 'cages' in Valby. However the police have stated that they will not being charging anyone.

InvestigateWest photographer Christopher Crow was also arrested by police wielding batons and accompanied by police dogs on the same march.

According to a report on InvestigateWest "Riot cops violently tore protesters from a cargo truck that carried the march's leaders. Police destroyed the cargo van's makeshift walls while confiscating numerous metal fence-cutters. About a dozen witnesses told InvestigateWest that police officers initiated the struggle".

Video: COP15: Police Attack Sound Truck and Assult/Arrest Media at "Stop Means of Production" Demonstration. Shortly after this video was filmed the reporter from Indymedia was detained. Commentary posted with this video describes the scene:

" At 1pm the demonstration was blocked, the crowd was surrounded, and police entered the sound car forcefully to shut down the march. Together with about two hundred protesters, journalists and in particular camera people were assaulted and pushed away from the scene. Some of the members of the press were threatened and attacked with pepper spray by the police."

Of some 400-500 protesters, about 275 were detained, made to sit down on foam mats , hands were tied with plastic quick-ties. Eventually they were loaded on to a bus.

Commentary on the intention of the protest and the police tactics. (Hit the Production Video)

On Friday 11 members of the Action Medics group were detained by Copenhagen police before even reaching a demonstration. Detention (not full arrest) was under the Danish Police Act, which permits preventative detention of people thought to be 'a danger to public security' or 'likely to cause a public disturbance' (approximate translation). But police told people they had been detained specifically because they were medics, in order to stop them providing first aid at demos. 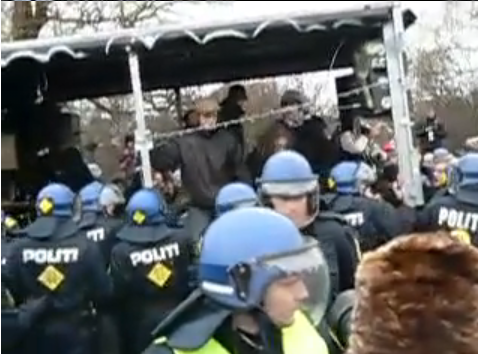