Copenhagen. Dec 14, 2009. Australia and Japan are currently blocking movement on legally binding emissions reductions for rich countries, which has precipitated in the G77 group of 130 developing countries walking out of climate negotiations unless talks on a second commitment period to the Kyoto Protocol are prioritized ahead of broader discussions under a second LCA track. A Flashmob of support by civil society for the African and island nations walkout was held in the convention centre.

Industrialised countries have not tabled any meaningful commitments around mitigation and medium - long-term financing and are pushingor a new agreement to sideline the Kyoto Protocol.

According to Friends of the Earth International the Danish Presidency has proposed for today "President's informal consultations", which appeared to be an attempt to collapse two separate negotiating tracks in Copenhagen and thereby 'abolish' the Kyoto
Protocol. This would allow rich countries to dodge their emissions reduction obligations.

Nnimmo Bassey said "We support African countries' demands for Kyoto targets and mandatory emissions reductions for rich countries. We denounce the dirty
negotiating tactics of rich countries which are trying to change the rules and tilt them in their own favor. Developed countries are stalling these negotiations as Africa attempts to move them forward."

According to Kim Carstensen, the leader of WWF Global Climate Initiative "Current uncertainty about the future of the Kyoto Protocol is creating a lot of mistrust and resentment within these negotiations. We believe a continuation of the Kyoto Protocol is a necessary part of the 2-protocol outcome of Copenhagen, and we support Africa's demands for this."

"The binding character of the Kyoto Protocol gives developing nations the confidence that these talks will not just end as an informal discussion. If we want a fair, ambitious and binding deal we need to keep working both on the Kyoto Protocol and a second protocol."

Jeremy Hobbs, Executive Director of Oxfam International said: "Africa has pulled the emergency cord to avoid a train crash at the end of the week. Poor countries want to see an outcome which guarantees sharp emissions reductions yet rich countries are trying to delay discussions on the only mechanism we have to deliver this - the Kyoto Protocol."

"This not about blocking the talks - it is about whether rich countries are
ready to guarantee action on climate change and the survival or people in Africa and across the world." he said. "Australia and Japan are crying foul while blocking movement on legally binding emissions reductions for rich countries. This tit for tat approach is no way to deal with the climate crisis." 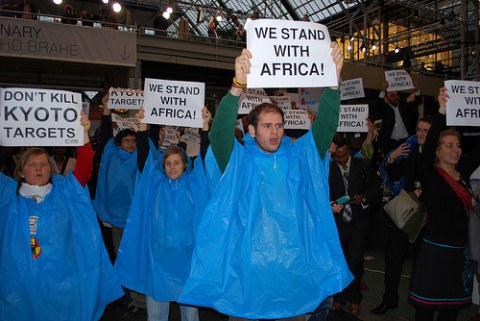