While the world debates emissions targets and climate funding amounts for developing countries in Copenhagen, a new research centre was launched in Perth on December 3 dedicated to developing technologies designed to help establish sustainable, low-emission, geothermal cities. At the same time the State Government is planning to double the number of coal-fired power stations at Collie.

"Our aim is to make Perth the first geothermally cooled city in the coming decade and we are working closely with geothermal lease holders, city planners and other stakeholders to advance the geothermal industry and make this vision a reality." said Centre Director, UWA Professor and Premier's Fellow Klaus Regenauer-Lieb.

The initial establishment occurred in February 2008 with funding of $2.3million from the Government of Western Australia.

Norman Moore, Minister for Mines and Petroleum said "The Geothermal Centre of Excellence is developing Australia's first commercial geothermal-powered heating and air-conditioning units. It is also looking at applications for existing desalination technologies to provide clean drinking water produced with little or no carbon emissions."

The Western Australian Sustainable Energy Association (WASEA) welcomed the new centre, "Western Australia must ramp up use of our massive renewable energy resources and having good science to underwrite the success of future projects is essential," said Prof Ray Wills, Chief Executive of WA SEA, the business chamber for sustainable energy industries in WA.

But he also called for "further Government support of pilot and demonstration plants in the Perth Metropolitan area to showcase the potential of geothermal energy to replace or displace the consumption of fossil fuel-based electricity," he said.

The Western Australian Sustainable Energy Association has identified geothermal energy as a critical part of the low carbon emission energy mix for Western Australia and will improve energy security.

Objectives of the Centre include:

On a global level WAGCOE will be collaborating with BRGM (Geological Society of France), New Zealand Geothermal Insitute, and the Institute of Geothermal Resource Management.

However the State Government is planning to double - from 4 to 8 - the number of coal-fired power stations at Collie by 2013. The Collie Coal industry currently produces 6.5 million tonnes of coal, emits 10 million tonnes of carbon dioxide and accounts for 13% of WA's total greenhouse emissions.

"If we just looked at the impacts on rivers and the water table alone we would say this is a bad idea - but the existing and the proposed power plants in Collie are among our biggest emitters of greenhouse gases." said WA Greens Senator Rachel Siewart.

"It's time Federal and State governments started developing transition strategies for regional communities such as Collie, instead of locking them into dead-end industries such as coal," Senator Siewert said. 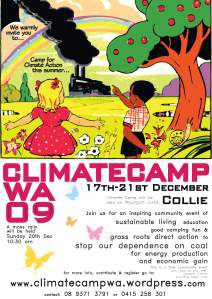