Polluters subsidised under emissions trading with households footing the bill

An Emergency Climate rally in Melbourne attacked the Federal Labor Government on its CPRS negotiations saying it had made too many concessions to coal and the power industry.

The Kevin Rudd Labor Government announced the negotiations with Ian McFarlane of the Liberal Party - a much watered down Emissons Trading Scheme - the Carbon Pollution Reduction Scheme (CPRS). Additional compensation to industry of $7.01 billion, including handouts to Coal Industry doubling to $1.5 billion, and $4 billion more in free permits to coal fired power station owners, and $1.1 billion to mining and manufacturing sector for increased energy prices while compensation to households was reduced by $5.67 billion.

First speaker was Adam Band speaking on the Government watering down its own CPRS legislation to get support from the Liberal Party for its passage through the Senate. "The Labor and Liberal Parties have together agreed to hand over billions of dollars more from our taxes to the biggest polluters in the country. What was a dud scheme to begin with is now going to be made even worse." Adam Bandt said.

"People may not know this but under the Treasury modelling that was submitted when the legislation went through the Senate the greenhouse gas emissions from Australia under the CPRS before the amendments, before this change, weren't scheduled to decline until 2035. So they would continue to increase and only start declining below current levels by 2035. And all this at the time scientists are saying we have 5 - 10 years at most to turn it around."

"So the deal that has been done last night and has been put today, and it may or may not have been voted on, represents a locking in of an already apalling scheme. And it is a scheme that will lock in failure." concluded Adam before introducing the other speakers.

He was followed by Clive Hamilton, Professor of Public Ethics at the Centre for Applied Philosophy and Public Ethics, a joint centre of the Australian National University, Charles Sturt University and the University of Melbourne. He is the Greens Candidate for the Liberal held seat of Higgins.

Clive Hamilton told the crowd "This CPRS legislation is so weak that the share prices of the energy utilities, the old coal fired ones, haven't gone down. We'll only know that we are having an effect on greenhouse gases in Australia when we see a crash in the share prices of the coal fired electricity generators. That simply has to happen. But of course that is not happening because they are getting all they want and more. An additional 4 billion dollars of tax payers funds will be transferred under this watered down scheme to the big polluters - the coal fired power plants - to compensate them for their polluting activity."

"The purpose of an Emissions Trading System is to cost them, to impose a penalty on them, not to reward them for continuing to pollute. The tragedy of this CPRS is it will keep coal cheap. We must make it more expensive in order to encourage the alternatives. And yet still Fossil Fuel companies are complaining that it is still not enough. TRUEnergy, it runs the Yallourn Power Plant, is out there complaining again 'It's not enough - we want more'. Has there ever been a group or more greedy, irresponsible and downright malicious corporations in Australia's history? I think not." said Clive Hamilton to cheers from the crowd.

The rally wrapped up with some political satire. Yes, the John Howard Ladies Auxiliary Fan Club who we came to love from the last election campaign, has been reborn as the Kevin Rudd Char Ladies Corporation, which provided some lighter moments with some satirical comment.

Lady Hazelwood and Lady Lou Yang explained exactly what the CPRS is all about. The ALP stands for 'Also Loves Polluters' or the 'Arctic Loss Program'. The CPRS stands for 'Continue Polluting Regardless Scheme' or the 'Carbon Pollution Rewards Scam'

One of the ditty's they sung to the crowd:

And they demonstrated a new fashion use for Clean Coal. 100% organic they assured us.

The original call for the rally included a march to the office of Lindsay Tanner, Labor Member for Melbourne, but this did not occur. There were quite a few police standing around from midday probably expecting an occupation! 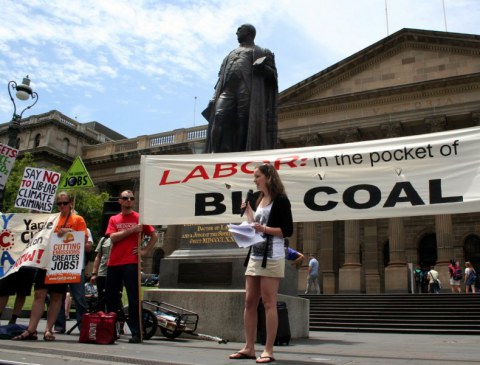 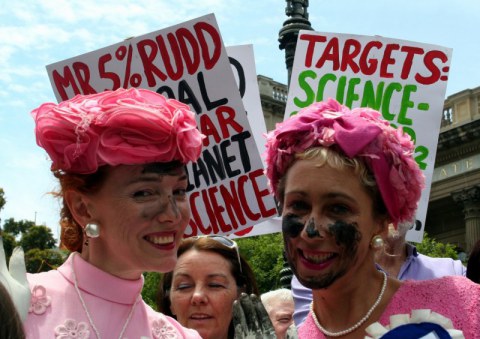