Two climate protesters were sentenced today in Brisbane and ordered to pay damages of over $3000 to Queensland Bulk Handling Corporation after a protest at the Brisbane coal port in October where they halted coal loading and had to be cut free of port infrastructure.

The protesters, Steve Skitmore (22) and Nathan Elvery (19) from Six Degrees Coal and Climate Campaign pled guilty to charges of trespass and obstructing a police officer and received $300 fines and good behavior bonds. The original damages claim was over $10,000, which the magistrate found "perplexing" and reduced the damages to $3000.

"The QLD government is neglecting to protect the futures of every day Queenslanders by not phasing out the coal industry. When the coal mining companies have so much power in the halls of parliament, the only way to expose the truth here was through civil disobedience" Said Mr Elvery

"Premier Bligh is contradicting every promise she makes to us that she is protecting our futures," Mr Skitmore said.

The pair plan to appeal the compensation order, believing the claim is unfounded and inflated, and merely a tactic to dissuade further climate change protests at a time when they are most needed.

The October protest involved more than 20 people, many in kayaks and canoes who attempted to blockade a coal ship from departing - see Climate Change Kayakers Blockade Coal Ship.

You can donate via paypal to to help pay these fines and eventually the damages if their appeal fails. See the Six Degrees page: Six Degrees protesters ordered to pay thousands 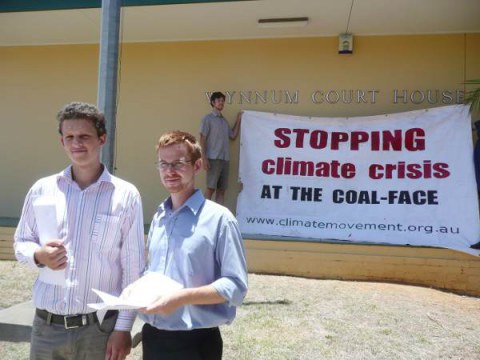