Is it hot enough for you yet in Melbourne? We are in the midst of a heatwave of Several days of highly unseasonal 30+ temperatures in early November. At 4 days of heat in excess of 30 degree so far... it is the longest spell of heat in Melbourne in November since 1925. The record of six days over 30 degrees in November, which occurred in 1896, might very well be broken this week.

But Adelaide has it even worse. The State Emergency Services have issued a an Extreme Heat Watch for South Australia. Last Saturday (Nov 7) the temperature reached 34.4, Sunday 36.7, Monday 37, Tuesday 38, with a forecast 0f 39 degrees on Wednesday, Thursday and Friday before some respite on Saturday with 34.

Two bush fires have been reported in East Gippsland: near Mallacoota and Orbost in National Parks, but are likely to be quickly contained. The heatwave promises to dryout bushland which will quickly escalate the risk from bushfire later in the season. Last year after two periods of intense heat, bushfires killed 173 people on Black Saturday, February 7.

The November Heatwave follows August being the warmest on record for Australia and the 2009 winter being the warmest on record for New South Wales, Victoria, and South Australia, according the Bureau of Meteorology. Dr David Walland, of the Bureau of Meteorology National Climate Centre, said in a press release “August was a most extraordinary month, with Australian mean temperatures 2.47°C above the long-term average, breaking the previous record by 0.98°C”.

So while we swelter in our cars, homes and workplaces, try and stay hydrated and cool, and minimise power use. During heatwave conditions power use peaks which can cause generators to load shed resulting in blackouts and brownouts. And most of that power is coal generated....carbon emissions....increasing atmospheric CO2....increasing climate change.

And remember the climate skeptics in the Liberal and National Parties who want to oppose the Government's Carbon Pollution Reduction Scheme - a very basic and inefficient attempt to rectify the greatest market failure of all - climate change caused by human carbon emissions. Ironically, the cap and trade mechanism for regulating carbon, may result in further market failure as carbon credits become packaged in increasingly complex financial products that could precipitate another economic crisis, according to a new report on carbon trading by Friends of the Earth (UK).

And the targets the Rudd Government have set - up to 25% reduction by 2020 if an ambitious climate treaty is signed with similar cuts by other industrialised countries, falls far short of what climate scientists say we should be aiming for: at least 40% cut in emissions by 2020 for a 50% chance of avoiding dangerous climate change. So far I have found only Scotland, of all industrial economies, has legislated to meet a 40% carbon emissions reduction target by 2020.

The 2007 International Panel on Climate Change (IPCC) report talks about the developed economies needing to reduce emissions 25 to 40% below 1990 levels to have a reasonable chance of holding warming to 2 degrees Celsius. Scientists in March 2009 called for Rapid Sustained Effective Action required to avoid Dangerous Climate Change or face the "risk of crossing tipping points and make the task of meeting 2050 targets more difficult. Delay in initiating effective mitigation actions increases significantly the long-term social and economic costs of both adaptation and mitigation."

So what can you do? Be aware of energy use, and conserve energy at home and in transport. Write to your State and Federal Members of Parliament to demand increased funding for renewable energy projects, for carbon targets that match the scientific advise, and the need for a legally binding international climate treaty. Challenge Governments on the continued subsidies to carbon intensive industries.

We are sweltering with a 0.8 degree of global warming. Another 0.6 degree is already locked in to the climate system. A world 2 degrees warmer will be hot, but a 4 to 5 degree world will be hellish - that is what we are headed for unless our politicians listen to the overwhelming scientific consenus instead of the multinational fossil fuel campaign to undermine Copenhagen. 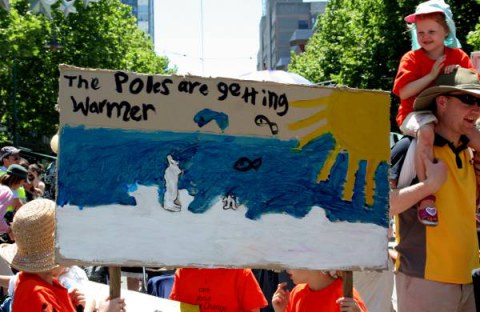 Nothing new - it was like this last year and will happen again.
Climate changes all the time.

We had 6 days above 30 degrees in November in 1896. What was the cause of the November "heat wave" back then?

Climate follows patterns, maybe it is supposed to be this way.

There are many compelling arguments regarding the increased difficulty in reaching oil reserves which may well result in a future view of historical production that looks sort of like a bell curve. And, it is quite plausible that the peak of that curve is around now.
http://www.aspo-australia.org.au/links/

while a first for at least a century is exceptional [adelaide's january heatwave]having two records broken in the same year [november's heatwave] suggests a new mean temperature for adelaide with new 'normal' extremes.....get use to it or do something about it !

Weather is different to climate.
Observing the weather is hour by hour day by day while climates change over several decades or more.
Australia is heating up, by as much as 1.2 degees last century, in other parts of the world by 1.5 but as an average globally by only .7 of a degree. it all depends where you are.
However we are between calculations right now so the averarage increase is more than currently published.
If you want examples look at rainfall over the Murray Darling Basin, reduced by 30% in forty years. May have something to do with deforestation combined with altered wind pattens but its climate change no matter what you say.