Climate protest 350 by cyclists in Melbourne

Hundreds of cyclists gathered and rode through the city of Melbourne before forming '350' as a human sign to call on the Australian Government and politicians from other nation states for substantial CO2 emission reduction targets to reach the 350ppm CO2 level, regarded by many scientists as the safe level to avoid dangerous climate change.

This was one event of many in Melbourne held on October 24, 2009 of a global protest in over four thousand locations calling for climate action.

Much of the ride was led by the seven seater Bikezilla accompanied by lots of kids, here outside the Victorian State Parliament. The State Government and energy minister Peter Batchelor has been advocating for a new coal export industry for Victoria, from the vast reserves of brown coal.

Greenpeace climate change campaigner Julien Vincent has urged the Premier to instead invest his government’s efforts and resources into generating opportunities for the manufacture and export of proven renewable energy technologies.

“If the state government wants to be taken seriously on climate change, we should be hearing announcements about turning the Latrobe Valley into Victoria’s renewable energy manufacturing hub,” he said according to a Friends of the Earth Media Release.

At the end of the ride through the city cyclists gathered in a park on the south side of the Yarra river and constructed a huge human/bike sign calling for the 350ppm CO2 target to send a message to world leaders in Copenhagen in December. A blimp took an aerial photo of the human sign. 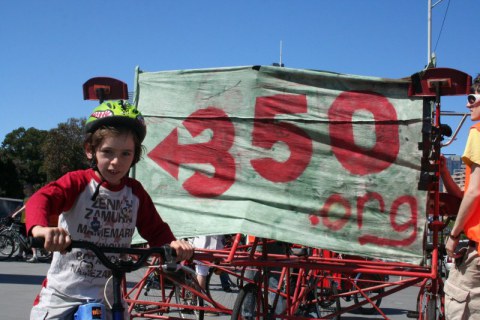 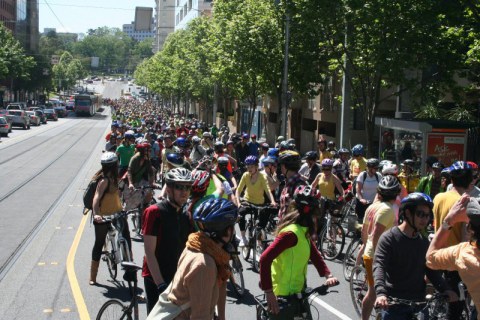 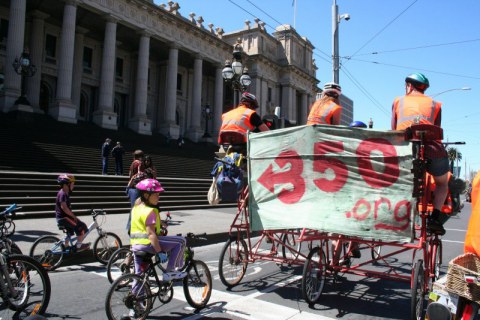 Slighty off topic, but check out this horrific incident. A car charges through a group of critical mass cyclists in Brasil.